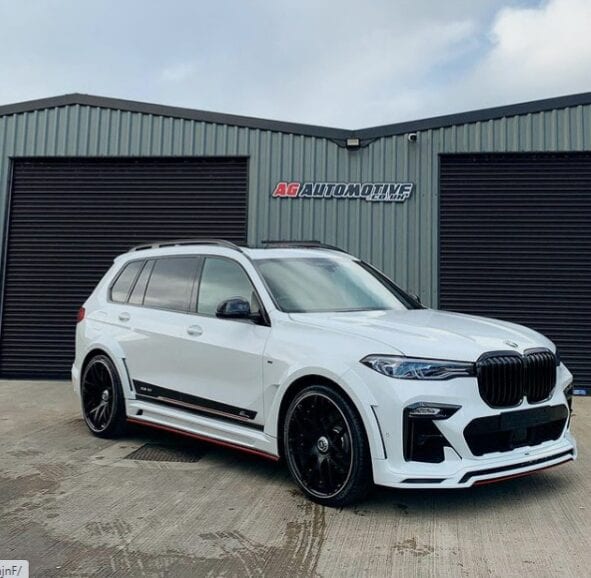 Meet one of our members, Alan Glendenning of AG Automotive

By NIBA4 March 2021News
No Comments

Under the spotlight: Meet one of our members, Alan Glendenning of AG Automotive

With over fifteen years in business, AG Automotive is one of Northern Ireland’s most respected body shops and a NIBA member we are truly proud of.

When Alan Glendinning founded AG Automotive it was with the desire to fully reach his potential as a specialist vehicle repairer.

Alan’s day starts with a thirty-mile journey to his workplace in Portstewart at 6:00 am. Alan says it gives him a chance to focus and time to plan his day.

His arrival at AG Automotive on the beautiful North West Coast is often followed quickly by customers arriving to drop off or collect cars before they go to work.

And then it’s straight on to the job.

“I’m always on the workshop floor as I prefer a hands-on approach,” he explains.

“I do all the painting myself. I believe it allows me to keep an eye on all jobs and keep workmanship to the highest standard,” he adds.

As the day progresses, Alan meets customers and provides estimates, and because it’s a very popular body repair shop, he’s answering phone enquiries throughout the day, which finishes at 6:00 pm.

The global pandemic has changed everyday life for most businesses in Northern Ireland.

But for Alan and what he describes as his ‘brilliant team’, they’ve experienced a massive amount of extra work, which he says, “we have been blessed with, we’re always getting busier.”

“We had so much work booked for nearly a year in advance, and I knew it was going to add to the pressure of keeping on top of the schedule.

We also had customer’s cars in the process of repair and had to stop work when the lockdown measures were introduced.

It was very uncertain because when closing we didn’t know when we could reopen.

The car dealerships were also closed so we couldn’t get any parts or paint supplies.

Customers were very patient; everyone was in the same boat and completely understood,” he adds.

And Covid-19 isn’t the only uncertainty for Northern Ireland businesses. On the 31 December 2020 the UK ended its transition period out of Europe, known as Brexit. Many businesses could be facing price increases and potential delays getting products and materials, but Alan says it hasn’t affected them, yet.

“The only thing we’ve noticed so far is that manufacturers of parts and paint have mentioned Brexit as a reason to increase their prices,” he explains.

And as he approaches two decades in business, Alan says he loves the fact that he meets customers from all over the world – tourists that are visiting this picturesque part of the world.

He’s had some unusual encounters too; he once carried out restoration and customisation work on a Mitsubishi Evo IX GT, and upon completion, the car was picked up and shipped off to a customer in Australia.

Business success came early for Alan – he was only 22 when he started AG Automotive – and he says his favourite memory was getting the keys to his new business premises as a youngster.

“It was daunting but really exciting,” he remembers.

As his business grew and had waiting lists of eager customers, Alan expanded the premises, adding new equipment and new spray-painting facilities.

And increasingly, he is carrying out work on supercars, Ferrari’s, Porsches, Bentleys, Aston Martins and Lamborghinis.

He has also carried out work on McLarens and recently enjoyed a private guided tour of the factory conducted by Amanda McLaren, Bruce McLaren’s daughter, which he remembers as “special”.

“Cars are still cars. Painting is still the same process,” he insists.

But as in-car technology advances, Alan says a big difference in the modern era is that every car they work on now must have a computer ECU reset to clear all faults, which he says was “unheard of 20 years ago”.

Cosmetically too, he has noticed significant changes in a modern car’s build.

“Two decades ago almost all cars were made from mild steel. Panels were thicker and easier to repair.

Cars now are made from lighter materials, like aluminium, carbon, and composites and require different methods of repair.”

As a result, Alan says AG Automotive is “always investing in new tools and equipment” to stay up to date with new repair processes.

But, Alan insists, “I enjoy this, and every day and every job is different, which keeps it exciting.”

And what about Alan’s plans for the future with AG Automotive?

He just wants to carry on as ‘normal’.

“With Covid-19 I think it makes you appreciate how good normal can be.”

He adds, “I also want to keep the workmanship to a high standard and keep making customers happy with their jobs.”

Read up on the latest news with NIBA.

Find out more about Alan and AG Automotive.

Find out more about CRASH Services, Northern Ireland’s leading accident management company, here for you after a collision.

NIBA is a collective of independent repairers operating in the car and light commercial vehicle market in Northern Ireland. If you need help with vehicle repairs get in touch today.

Your local independent bodyshops are here for you